I’ve done kind of a lot of keyboards at this point. I made two Atreus from a kit, modified one to be wireless, and then almost completely rebuilt it after stepping on it and crushing the case. Then I got into Ergodox, and built one of those from an ok kit from Input Club. Finally, I decided 40% boards are not really for me, so I made a compact wireless planck that didn’t work terribly well ergonomically.

So, I have a lot of boards, and they’re all of the microcontroller with matrix variety. They were all kits because I thought hand-wiring was a pain in the ass, and large PCBs tend to be expensive to have custom-made for a one off. But, time moves on and I’d heard about what’s called ‘hand wiring,’ where you don’t need a pcb to hold the switches. I got some plates for an ergodox from a european company for a steal, and bought switches from Mouser. Then, this fall happened, in which I was super busy with work and travel and so nothing got done.

Thinking about it, though, that’s not true; I designed the thing and managed to solder all the components together before I went on vacation in October. I used an adafruit feather M0 w/bluetooth that I had sitting around, since they’re great for wireless keyboards, and the Boldport Ixpando, which is a breakout for the microchip MCP23017, a 16-bit i2c shift register. I read a couple guides on hand-wiring, bought a bunch of diodes, and threw it together. The bottom plates are some 3/16” aluminum I just happened to have laying around. Brass standoffs and M3 machine screws hold the key plates to the base. 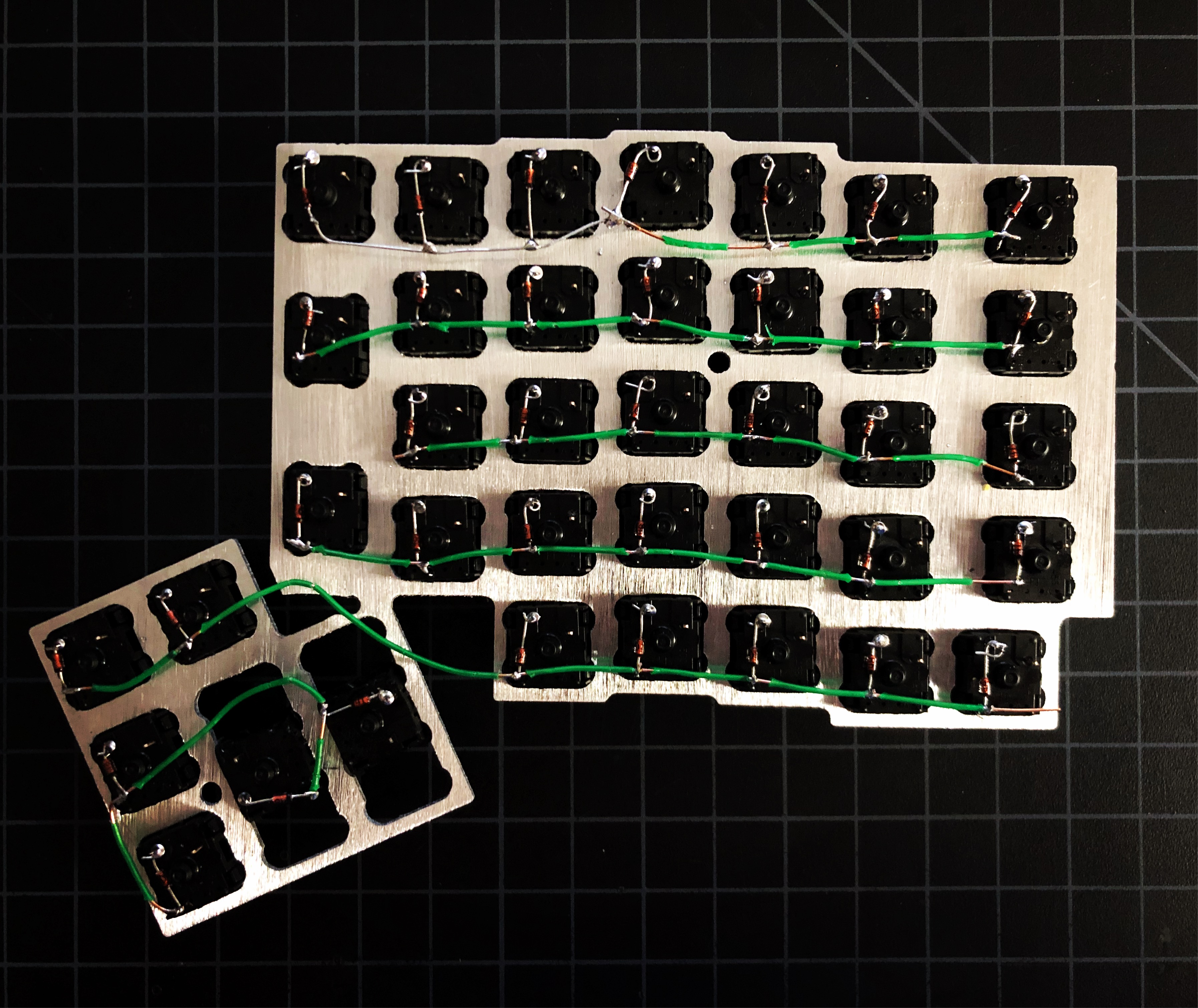 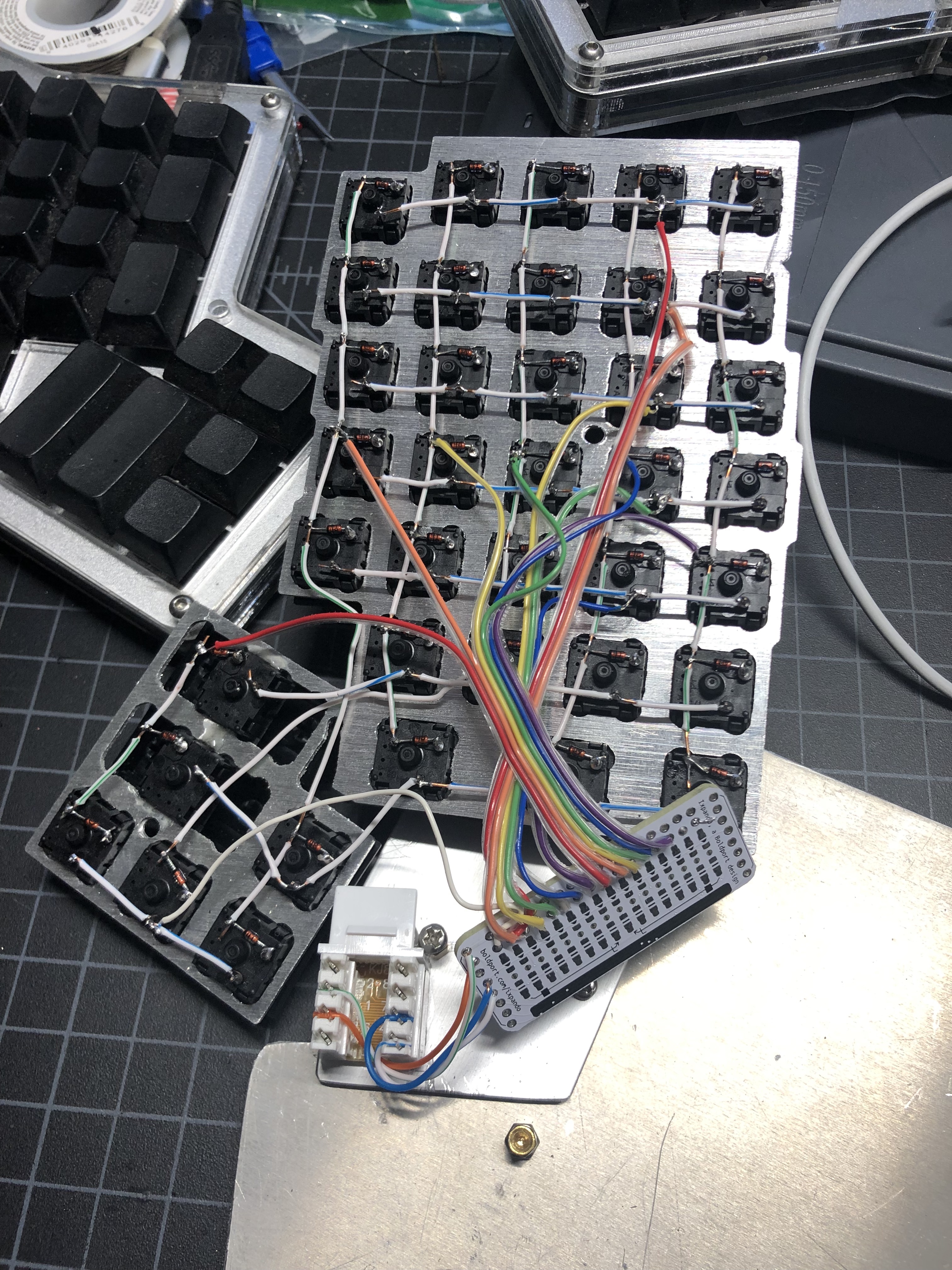 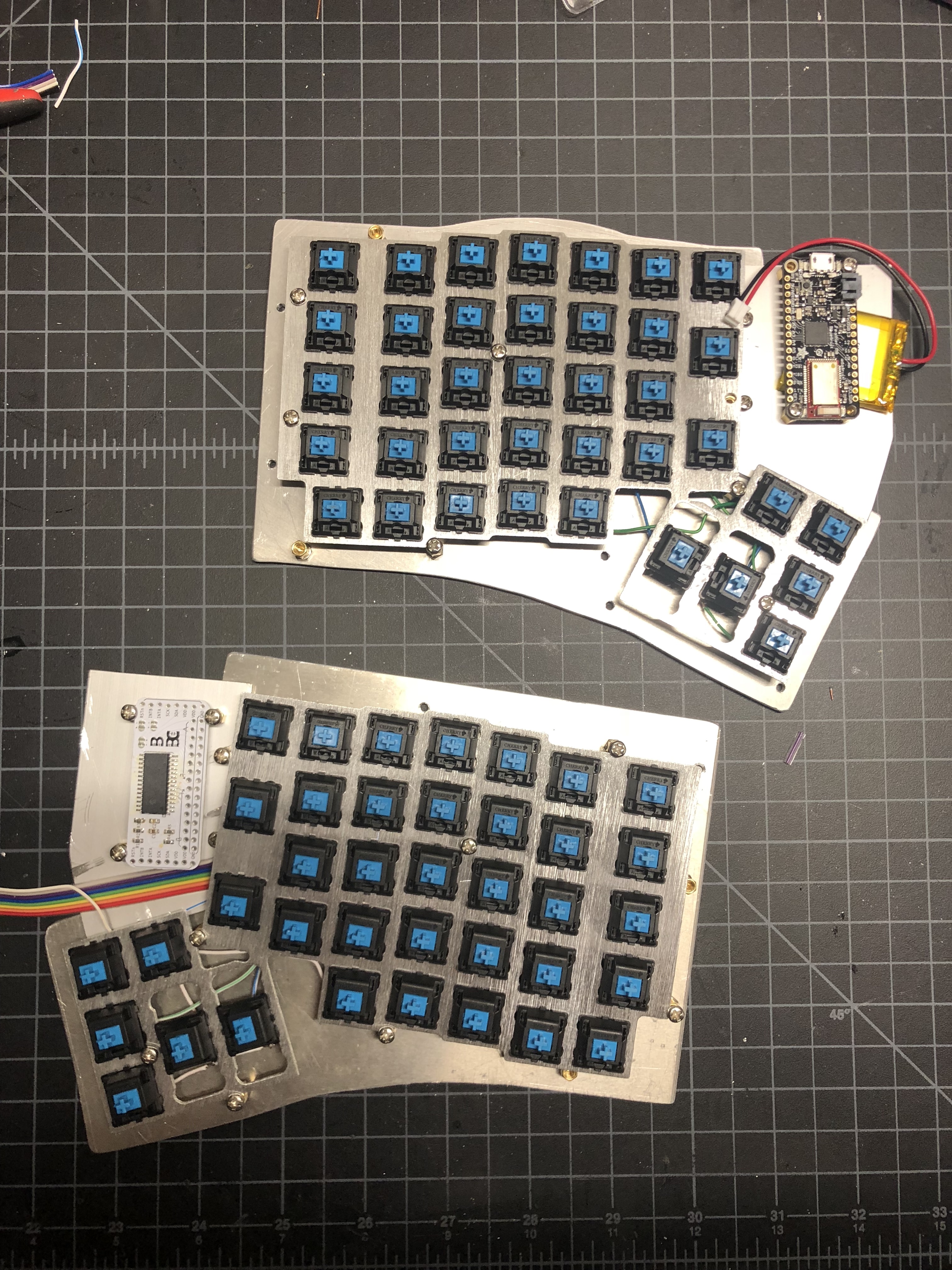 After I got that done, it sat for a couple months while other matters occupied my time. But, eventually I got back to it and modified my existing wireless keyboard firmware to work with the shift register. That’s a project that’s still ongoing, because there’s still a tiny bit of lag; 25ms to scan is a little too long. I’ve wrestled with it quite a bit just to get it to work, but it finally does. 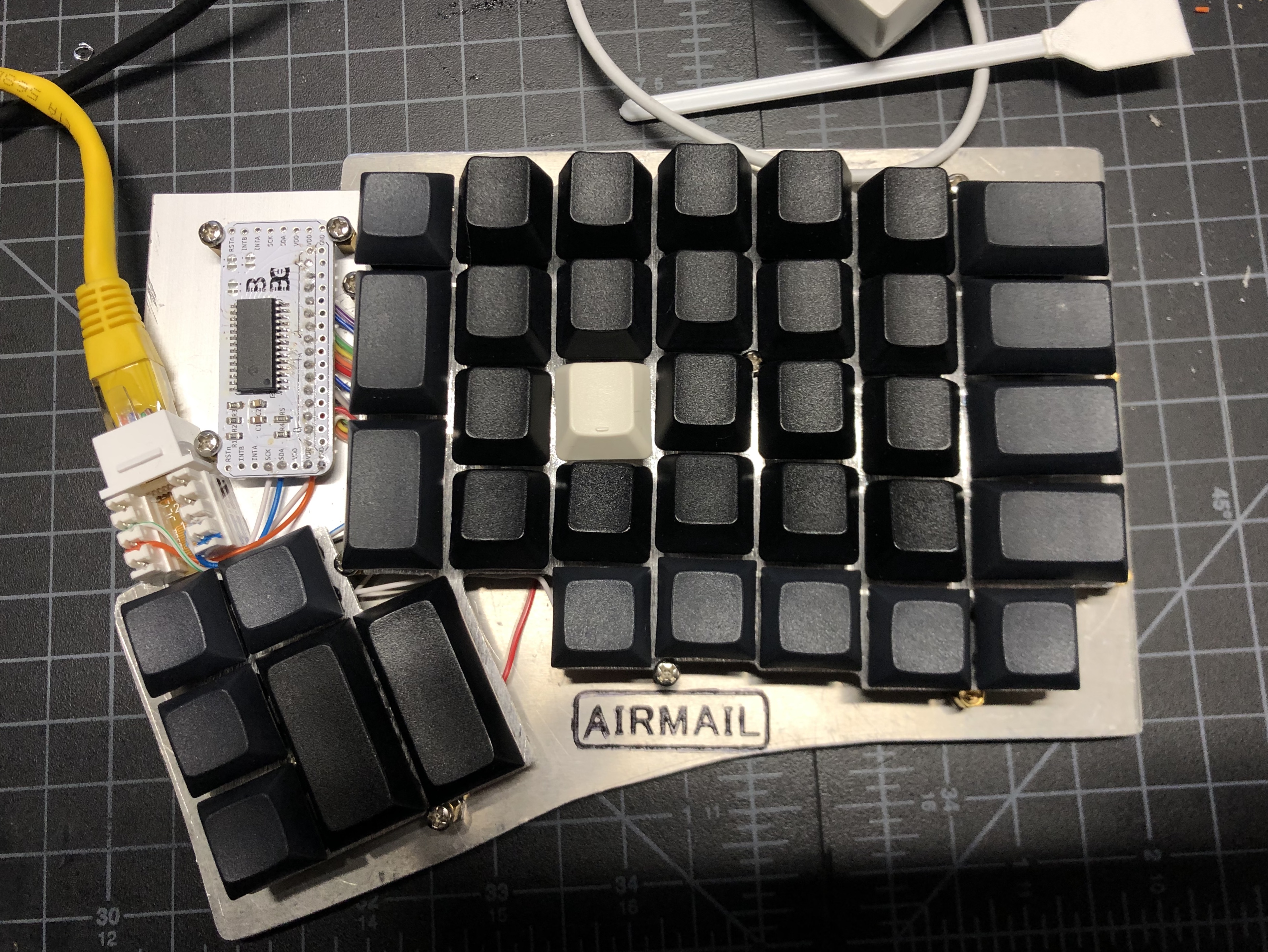 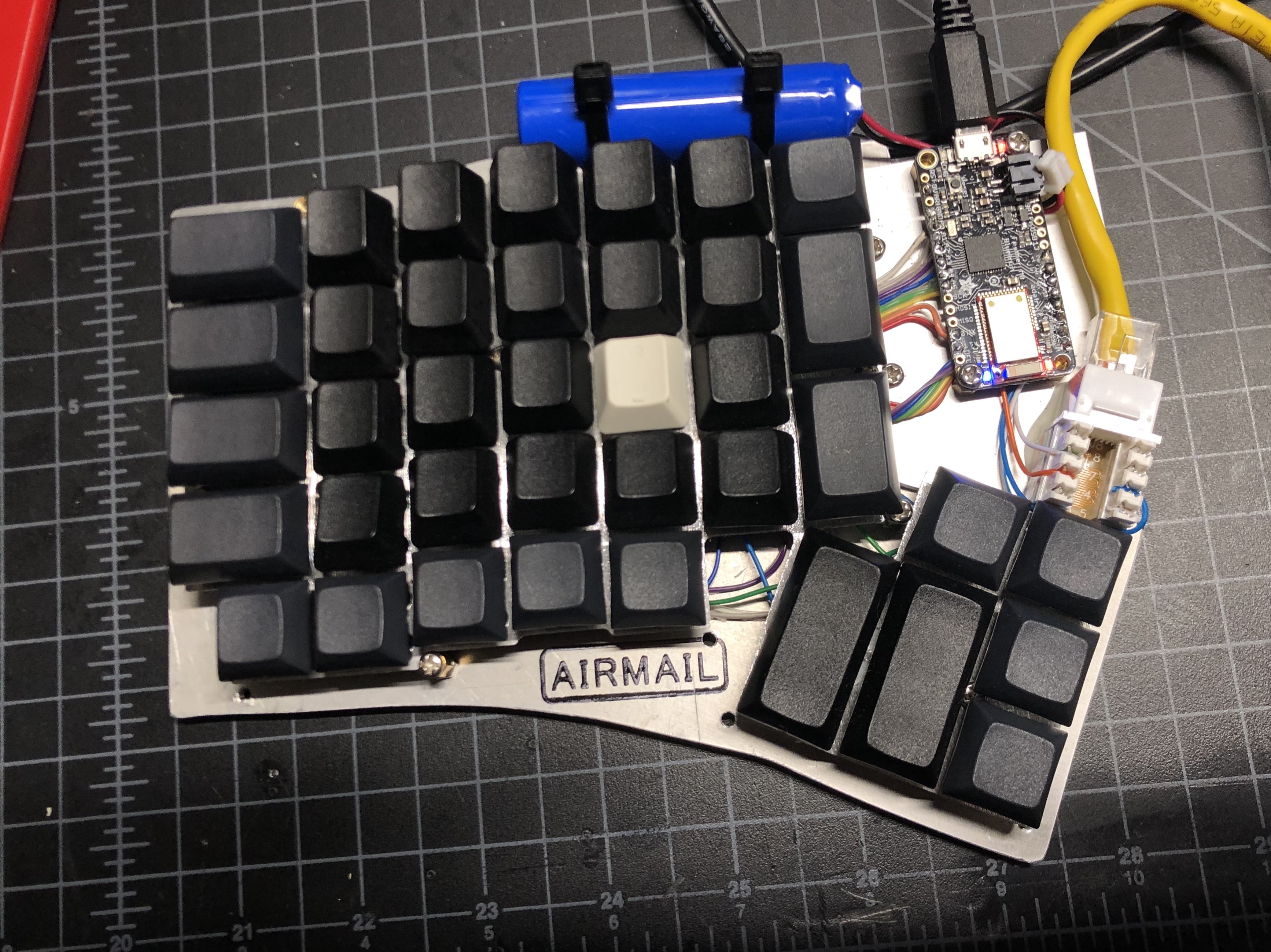 (If you look closely you can see that the battery is disconnected; that’s because I was debugging, but it works just fine. I do need to put in an on/off switch…)